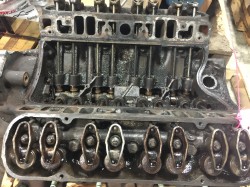 Did you know that Remanufacturing is Recycling?  Have you considered how your decision to make a major repair to your vehicle affects our environment? We have researched how much energy JASPER utilizes in the remanufacturing process and compared it with information from the Argonne National Lab, a research center for the U.S. Department of Energy.

By averaging the curb weight of three vehicles: a Mercedes-Benz W126, a Hummer H2 and a Toyota Prius, a determination was made on the average amount of energy required in manufacturing vehicles. Energy usage at JASPER, per drivetrain component, was figured and, on the average, only 1% of the energy is consumed in remanufacturing a drivetrain component in comparison to manufacturing the entire vehicle. In tangible terms, that is an energy savings of nearly six tons of coal or 1008 gallons of crude oil. Rather than replacing their vehicles, our customers, by purchasing JASPER remanufactured engines, transmissions, and differentials saved enough energy in 2007 to power an estimated 598,000 households, or every residence in a city the size of Washington, D.C., for an entire year!

In a still cited 1981 Massachusetts Institute of Technology study on remanufactured automotive components, it was approximated that 85% of the energy exhausted in the original product was preserved in the remanufactured product. Instead of wasting energy in the replacement of raw materials, JASPER cleans and remanufactures the original castings to the specifications of the original equipment manufacturer. In another study at the Fraunhofer Institute in Stuttgart, Germany, it was estimated that annual energy savings by remanufacturing worldwide is equivalent to the electricity generated by eight nuclear power plants or 16,000,000 barrels of crude oil - enough to fill 350 oil tankers.

By purchasing a remanufactured engine, transmission, or differential, everyone can benefit from the conservation of our natural resources.

In addition to remanufacturing, following are a few things JASPER is doing to protect our environment:

The remanufacturing process breaks the cycle of raw material harvest & production, greatly reducing the emissions of greenhouse gases. As a recipient of the 2006 Verizon Supplier Excellence Award, JASPER Engines & Transmissions has been recognized as a company with strengths in environmentally safe remanufacturing techniques. Future ecological challenges will be greatly reduced if consumers are driven by environmentally conscientious decisions. By purchasing a JASPER product, not only are you buying the best drivetrain component in the industry, you are contributing to environmental preservation.